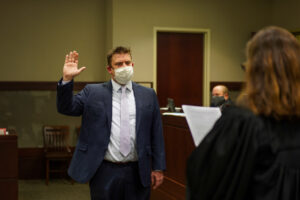 District Attorney Ashley Hornsby Welch announced Wednesday that Michael Macht has joined the 43rd Prosecutorial District as an assistant district attorney.Based in Haywood County, Macht will work districtwide – across the seven westernmost counties – as needed. “Mike comes with an enormous amount of experience in criminal law,” Welch said. “I’m excited to add him to the team.”District Court Judge Monica Leslie swore in Macht last week.The district has an office in each of the seven counties and, with the addition of Macht, 42 employees, including 13 prosecutors.Macht attended Catawba College in Salisbury. After graduating with a degree in political science and a minor in pre-law, he attended Penn State University in State College, Pennsylvania. He earned his Juris Doctor degree in 2005. After law school, Macht moved to Asheville, where he worked as a Buncombe County public defender. In 2008, he started his own law practice, specializing in criminal defense, juvenile defense, guardianship and personal injury work.