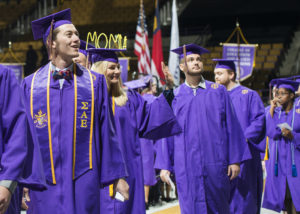 CULLOWHEE – It will be May in December for members of Western Carolina University’s spring graduating class of 2020 who were originally scheduled to participate in commencement ceremonies this month until the events were postponed by the COVID-19 pandemic.

WCU Chancellor Kelli R. Brown announced Friday, May 8, the university’s plans to reschedule spring ceremonies for the weekend of Dec. 11.

Although that also will be the weekend for commencement ceremonies for members of the fall 2020 graduating class, the university is planning a separate ceremony for the May graduates, Brown said.

“Our spring graduates deserve their own commencement exercises, as do our fall graduates,” she said. “We felt that is was important to allow our graduates to participate in a ceremony with their classmates rather than try to combine them.”

Brown announced in March the postponement of all spring commencement exercises that were originally scheduled for May 8 and 9. University officials had considered a date in early August for the rescheduled ceremonies, but ongoing uncertainty regarding sufficient improvements in the COVID-19 situation combined with logistical difficulties of holding a large-scale event so close to the opening of the fall semester made the December date a better option.

To help acknowledge the spring 2020 graduating class, the Office of University Communications and Marketing developed a special online salute. It is available at commencement.wcu.edu.

Additional information, including time and date for the rescheduled commencement, will be announced later.