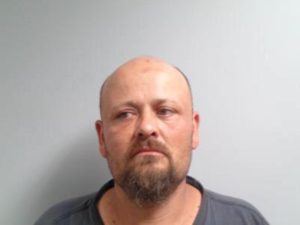 Sammy Joe Shuler, 44, from Haywood County will spend at least five years behind bars after pleading guilty to two felonies and admitting habitual felon status.  He pleaded guilty to one count of larceny of a motor vehicle and larceny of a firearm in Haywood County Superior Court.   According to the prosecution’s presentation of the facts regarding the larceny of a motor vehicle, last year, Shuler stole a car that was parked in a driveway with the keys left in the ignition. The charge for the larceny of a firearm came from an incident earlier this month when Shuler stole a revolver left in a parked ATV. Prosecutors noted they are currently working with law enforcement to recover the firearm.  Because Shuler admitted habitual felon status, what would normally be two low-level felonies were elevated in status, and he was given a sentence of 67-93 months in prison.