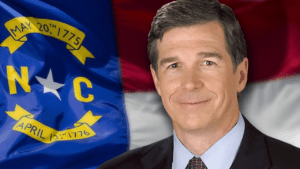 Gov. Roy Cooper and Attorney General Josh Stein have formally asked North Carolina judges to quickly strike down dozens of legislative districts drawn by Republicans that are at the center of a partisan gerrymandering lawsuit. The top elected Democratic leaders on Wednesday requested that the judges accept their legal briefs in litigation filed by Common Cause, the state Democratic Party and voters against Republican legislators. The judges heard two weeks of testimony but haven’t yet ruled. Cooper and Stein say the judges have the authority to declare the maps unconstitutional for favoring Republicans excessively and insulating them from changes in voting behavior.