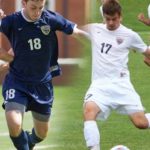 Emory & Henry are off to the best start in school history and Jordan Couch of Sylva leads all of NCAA Division III in scoring, amassing a total of 12 goals in 6 games , including two four-goal matches.  He has scored at least one goal in every game.

Additionally, earlier this year he was the ODAC player of the week, an honor he also received last year.

EMORY, Va. – The Emory & Henry men’s soccer team jumped out to a historic start in its first five games this season, reeling off five straight victories for the best start in program history.  The Wasps now stand 5-1 overall after a 2-1 loss on the road at William Peace University. In the six games that E&H has played, the squad has scored 22 goals which match the total number of goals scored by the team in all 17 games last season. The success of the team can certainly be attributed to the improved talent level and team cohesion under fourth-year head coach Robert Richardson. But two players, Jordan Couch (Abingdon, Va.) and Zach Quest (Charlotte, N.C.), have led the Wasps offensively and are earning national attention for the program. Couch leads all of NCAA Division III in scoring, amassing a total of 12 goals so far, including two four-goal matches. Couch scored a total of six goals during the 2015 season.

The junior, who was selected to the All-ODAC second team last season, stated “It’s both humbling and rewarding to see all the hard work that the team has put in this summer and during the preseason paying off. It’s still early in the season, and I know the team and myself still have a lot to work on to continue the early success that we’ve had thus far.”

Quest currently leads all of Division III in assists with eight on the year and has two games in which he has tallied three assists.  On leading the nation in assists, Quest stated ” The assists have come quickly so far this season because the team has created a lot of chances, and we have some great finishers on the end of those chances.” But Quest does not just help others score.  He is currently second on the team in goals with four on the season.

Quest has also been nominated by HeroSports.com for Division III Men’s Soccer “Hero of the Week.” Vote for Quest at http://herosports.com/news/d3-mens-soccer-hero-of-the-week-3.

Couch and Quest have combined for 42 points on the early season. The two only had 16 points all of last year. Furthermore, the two have two match-winners each and a combined 35 shots on goal.

The team has been earning national recognition as well. On HeroSports.com‘s national rankings, the Wasps were the biggest movers this week after E&H jumped an astounding 220 spots.

You can find the Division III national statistics at http://www.ncaa.com/stats/soccer-men/d3.

The Wasps will look to continue their winning ways as they open up conference play versus Roanoke College. The game will take place at Fred Selfe Stadium on the campus of Emory & Henry at 1:00 p.m.